A Salute – to the Super Awesome All Whites

Next it is Paraguay, then Uruguay, then Youraguy and Imaguy and then who knows.

Well done those men. In a non-exclusive or gender limiting way.

This is how we do it on Super Awesome Mega Battle Tank … singing to a broomstick with the mike taped to it set against a silvery backdrop held up by duct tape.

It was a nice way to end the production … and it is available for free download from here. Suitable for singing along when under sustained heavy enemy fire, or when being dealt to my your own forces.

Oh, and The All Whites one-all with Italy. Wooo Hooo!!!!!

Last night [being the now-hallowed 10th of June] was the final night of what shall be rather grandly called principal photography.

It was a chance to unveil one of our hitherto secret weapons … the mighty, and mighty goddam hairy torso of Alex Tashkoff.  He wanted to go Bruce Lee on our arses, and I said that was acceptable, if rather tangental to the rest of the plot, if he would unleash the beast within. Actually, it is pretty well on the outside as well, as you can see here.

Afterwards the crew, sans Janet who was at some poncey deputy principals’ dinner, went to the General Practitioner’s to congratulate one another for another damn fine night’s work. Mr Tashkoff and Mr Cossar talked about metaphysics and things of a higher philosophical plane while Mr Qian and myself engaged in the conversation with bon mots as they were appropriate. Or something completely unlike that.

Episode 12 is out Monday, and Episode 13 a week after that.

On the other hand, the synchronicity of the university can be a weird thing.

I was watching South Park before I went to work this morning, and it was the one where the boys set up the Super Awesome Talent Agency. I think Janet was just about to leave, and did that raised eyebrow thing.

No, I thought of it myself, I said.

But I know I have seen it before, mainly because it features Wing, and it WAS done in 2005, and since I only wrote the Super Awesome Mega Battle Tank screenplay 18 months ago …

On the other hand, I had the idea for a funny teenage werewolf movie in 1982. And fucking Teen Wolf came out in 1986. So it just goes to show.

There’s always a chance to add to the magic

I was digitising episode 11 last night and I realised that it was just too damn short. I mean, too short to build up that sense of wonder and fun that is compulsory in every episode.

So Cormac and I shall retire to the bowels of the building tomorrow at lunchtime to shoot a couple of ad hoc bits which should beef up not only the time, but the full fledged gloriosity of the episode. Which will still only run for three minutes.

Anywhos, here is the the mailout that went with this one. Happily I managed to remember to put in the link, and it also includes a bit of the script which might clarify that which is happening on screen. Sometimes even I am a bit puzzled what is going on, and that probably shouldn’t be happening …

"Call me fucking numb nuts again and you'll die in an even worse imaginary way."

The Super Awesome Mega Battle Tank is toast. Ext: there is smoke and flames on the armour, the tracks don’t look so great.

Inside the tank there is smoke, sparks, wires hanging down, strobe lights, and Gunner Gossamer and Sous Chef Bill are screaming over the top of each other incomprehensibly. Both are ostensibly yelling out the readings they see, but this isn’t actually the case. Only Commander isn’t phased by the looming catastrophic failure of the armour, and thusly, his mortal body.

Gentlemen, one at a time.

[Cormac and Bill look at each other (beat) then burst into more shrill gibberish. Commander reaches over and puts his hand over Cormac’s mouth, allowing Sous Chef Bill’s outpourings to be revealed. ]

… and every season I just hope against hope that the goddam  Black Caps have got their acts together, but they always always play like bunnies and year after goddam year we get our arses kicked by the fecking Australians. And if they win two matches in a row  I start hoping once, just once, they’ve got a team with a bit of talent and some balls and won’t go out on the piss and behave like drunken arseholes before big games but they always screw it up and then it’s all about how they’re in rebuilding phase or they’re aiming towards the next tour to England or some such pile of absolute shite …

Time and a place for lamenting New Zealand’s crap cricketing performance. The time is (checks watch) later. Now is the time for returning fire and preparing for one last assault on Bryce the Destroyer. Who so far seems to be having the upper hand in this …

Happy Queen’s Birthday everyone. Trust you all received some gong from Her Majesty. I am sure I’ll get something as soon as the postie arrives …

THERE are many important messages that make up the rich, multilayered fabric of  Super Awesome Mega Battle Tank, but if I was to pick the one I would like everyone to focus on, to think about, to ponder, and then act upon, it is to never EVER buy Australian military hardware. Ever ever ever ever.  (OK, because I am a reasonable person, I will temper this rant by saying their Bushmaster armoured vehicle may be all right. I only write of that which I know.)

Designed by Austrians, made by Australians. Ooops.

Anyway, here is why NZ should never again buy Australian bang bang shooty stuff, either from their own companies now, or from Australian Robotic Service Enterprises  in the future.

It’s MADE BY AUSTRALIANS.  (The only buggers I would be less inclined to buy high-tech military hardware from would be New Zealand.)

Evidence:    Anzac Frigates. Proof is below.

Evidence:     Steyr rifles. Proof.  Cracks appeared within a year of being received by the NZ Defence Forces. Number of problems firing with safety on.  Know how I know this? Because when I worked for NZ’s Army News, the engineers from Trenthan wanted an article about spotting the cracks and getting the rifles sent back for remedial work. I asked aguy from the Australian company about this, and within five minutes he was in damage control talks with a colonel about making sure the story  didn’t look too damaging. They were designed by Austrians, which is acceptable. How the A and the L got into the final manufacturing deal is beyond me.

But don’t take my word about the submarines and frigates.

Here is something from the pages of The Dominion Post, June 1, 2010.

Defence spokesman Phil Bradshaw said a water seal in the port engine leaked, and the starboard engine’s control system developed an intermittent fault so the ship was diverted to Sydney. Technicians from engine manufacturer MAN were working with the ship’s engineers.

Defence Minister Wayne Mapp said the breakdown was “a bit unfortunate but it is in the realms of teething problems”. Repairs would be done under warranty.

The two 1500-tonne ice- strengthened offshore patrol ships, which cost $110m each, were to have been delivered two years ago but were held up in Melbourne pending the resolution of protracted contract wrangles with shipbuilding contractor BAE Systems. These were resolved when BAE agreed to pay $85m to settle all outstanding warranty claims on the seven-ship fleet.

(It carries on, but you get the gist.)

Now, the other thing is the Collins Class Submarines. They have been a nightmare. Over budget, as with all Aussie military projects, late, under-staffed, noisy, and their combat systems laughable.

Here is a graphic from Adelaide’s The Advertiser (May 24, 2010)  showing the current state of play. 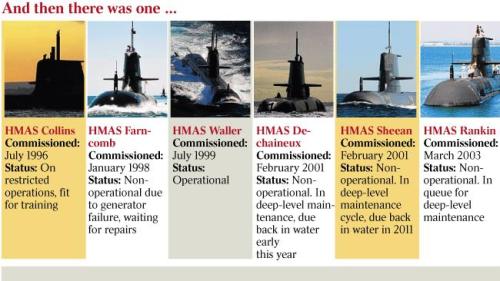 Your Honour, I rest my case.

Before I put in the mailout that went this morning, (the photo today featuring Commander Alex Tashkoff just after reciting the immortal phrase: One sausage, with delicious tomato sauce.)

… I just want to emphasise again the stunning work put into the costumes by Gemma.

Here is the Super Uber Commander’s jacket, fashioned from a mess waistcoat from Comrades, with little frilly bits added.

Of course, a costume ain’t much doin without some actor or actress inside it.

The final product, with Ms Elizabeth Cossar. (Note the well placed barbecue light behind her which provided something of a halo effect. Not visible is the flickering amber light provided by my pushbike light and which is currently doing a sterling job acting as a car magnet on my bike.) 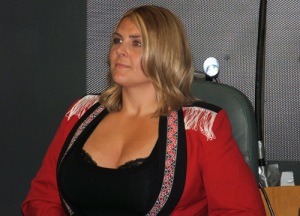 The mailout for Episode 10 – Sausage Fest.

Under a constant bombardment from Bryce the Destroyer the intrepid crew of the Super Awesome Mega Battle Tank find time to turn upon each other in savage emotional outbursts as the Commander continues on his own Super Awesome Individualised MIssion to end it all with the quick application of force to    ………………………….      Big Red.

PS:  June is the “write a novel in a month” thingy hosted by the kiwiwriters website. Register, and write. Free free free, and a good discipline for getting out that novel which demands lurkage.

I shall be spending the month novelising the screenplay of SAMBT which will then be offered absolutely free. The line forms to the right …

Here is the reason that episode 9 has gone gangbusters.  In fact, as I write, it is perilously close, in a good way, to overtaking episode one as our most-watched. 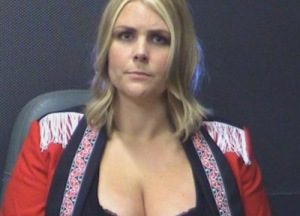 Now, let us count the ways of crapness evident in this shot taken of us by Emma Allen and which was thankfully not used in The Wellingtonian. Not through any fault of Emma’s, but due purely to our usual high standards and attention to detail. 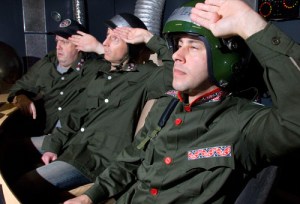 We salute the god of acting. We just don't want to have anything to do with it. Alex, right, has the cool helmet. Cormac gets the middle cool helmet, and I get the hat I stuck a shoulder patch on with uhu glue.

I think the jeans are a bit of a giveaway, as are the horribly irregular forms of saluting going on. I sentence all of us to boot camp and some good Kiwi Space Patrol discipline. Preferably after I am dead. My corpse is happy enough having a go though. I’ll vouch for its sincerity.

We don’t generally salute.  It was in the script, but like many things in the script (mega intergalactic space battles, sweeping vistas of foreign planets, life and death struggles between mechanised titans of death) it somehow never got done. One of those oversights that occasionally happens.

I see the hand of Mr Mutch in this …

Yes, Lindsay Mutch I am sure is the driving force behind the Wellingtonian running this, but all publicity is good. Well, until they find out about the embezzling I have been engaged upon …  (Linday’s blog is at http://fuggedaboudid.blogspot.com/ for his own unusual view of the world. )

The pic is by Emma Allen (emmaraeallen@gmail.com) who freelances for The Wtgn; the reporter was Jim Chipp, so thanks for that, folks.

Now I just have to drive to Upper Hutt to steal my parents’ copy before they see it and connect this with why I haven’t been spending much time out there with them … and that I am not the maker of sophisticated romantic comedies that my photocopied business cards indicate I might be.

And speaking of Mr Cossar, here is Missus Elizabeth in a superb ensemble by Gemma. 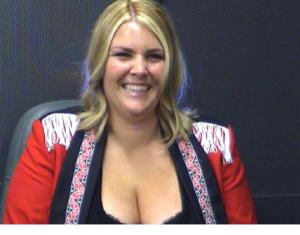 I think the key words for this crackup were "blibbly blubbly".

I believe we are getting a media mention today so if you have come here by mistake, just go to kiwispacepatrol.co.nz for the full YouTubal experience.