There’s always a chance to add to the magic

I was digitising episode 11 last night and I realised that it was just too damn short. I mean, too short to build up that sense of wonder and fun that is compulsory in every episode.

So Cormac and I shall retire to the bowels of the building tomorrow at lunchtime to shoot a couple of ad hoc bits which should beef up not only the time, but the full fledged gloriosity of the episode. Which will still only run for three minutes.

Anywhos, here is the the mailout that went with this one. Happily I managed to remember to put in the link, and it also includes a bit of the script which might clarify that which is happening on screen. Sometimes even I am a bit puzzled what is going on, and that probably shouldn’t be happening … 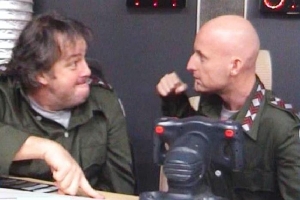 "Call me fucking numb nuts again and you'll die in an even worse imaginary way."

The Super Awesome Mega Battle Tank is toast. Ext: there is smoke and flames on the armour, the tracks don’t look so great.

Inside the tank there is smoke, sparks, wires hanging down, strobe lights, and Gunner Gossamer and Sous Chef Bill are screaming over the top of each other incomprehensibly. Both are ostensibly yelling out the readings they see, but this isn’t actually the case. Only Commander isn’t phased by the looming catastrophic failure of the armour, and thusly, his mortal body.

Gentlemen, one at a time.

[Cormac and Bill look at each other (beat) then burst into more shrill gibberish. Commander reaches over and puts his hand over Cormac’s mouth, allowing Sous Chef Bill’s outpourings to be revealed. ]

… and every season I just hope against hope that the goddam  Black Caps have got their acts together, but they always always play like bunnies and year after goddam year we get our arses kicked by the fecking Australians. And if they win two matches in a row  I start hoping once, just once, they’ve got a team with a bit of talent and some balls and won’t go out on the piss and behave like drunken arseholes before big games but they always screw it up and then it’s all about how they’re in rebuilding phase or they’re aiming towards the next tour to England or some such pile of absolute shite …

Time and a place for lamenting New Zealand’s crap cricketing performance. The time is (checks watch) later. Now is the time for returning fire and preparing for one last assault on Bryce the Destroyer. Who so far seems to be having the upper hand in this …

Happy Queen’s Birthday everyone. Trust you all received some gong from Her Majesty. I am sure I’ll get something as soon as the postie arrives …