And that’s why you do backups. 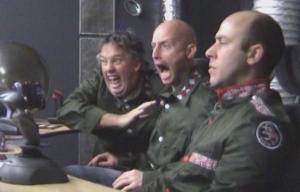 Alex, right, Cormac and Bill display their true acting craft by only hinting at the feelings that lie beneath.

The first upload of episode two, Tanked Up,  ended up with really  bad audio sync problems. I consulted the oracle of Google, onto to find that the two possible solutions were to try again, or change the codecs of the encoded codey code by manipulating the whangle fang doogulus formula. So I reloaded it after resaving it as an svcd file format rather than the dvd format that Ulead 11 offers.

The file is not only much smaller, but there’s not real drop in quality I could see. (Yes, thank you for that comment). By this stage I had found that the original Ulead editing file had corrupted, or been possessed, or dispossessed, and I resorted to using the episode 2 file I had sent to gmail as a backup. Yes, as Cormac says, if you don’t back up the episodes, you’re a big fat hairy monkey boy. I don’t know whether that applies specifically to me or everyone in general. We’ll say everyone.

So, that’s the final excitement that went with that.  All’s well that loads well. Now, perhaps I should save episodes four and five …