Pah, Blake’s Seven never had a desk with big balls 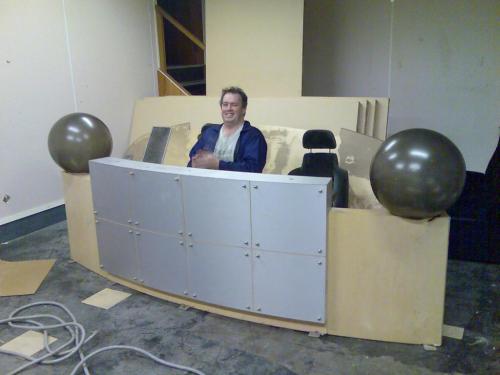 The set, as put together by Australian Robotic Service Enterprises.

Well, we got promoted from the concrete alcove to the Hidden Studio of Storage, deep within the mysterious rabbit warren of the Olde Building of the Dominion Post. (Thanks Tim Nunan and Wayne Hunn. And Rowan for the big pannelly things).

Cormac and I lugged this goddam desk up from the furniture storage area, the big bally things came from a Lower Hutt company (if you want to know more, ask me, but I think it’s kind of a secret … I’ll check with Corm). The seats came from Upper Hutt for a buy off Trademe (Great trade, thanks Pierced1). Funnily enough, as I took a load of crap up to the Silverstream tip for the olds, there were two old car seats lying there waiting for the bulldozer to deal to them. I should have leapt in and grabbed them, but I feared being mocked and pelted by the locals.  Hard crowd, that Silverstream tip lot.

Anyway, Gemma has the costumes in hand, we have some flashy led lights from the Otto, Albie and Pold1e Moloney-Waldman Special Effects Co-operative, and we had the first reading through of the script.  There were two laughs. In 45 pages. Is that good?

One response to “Pah, Blake’s Seven never had a desk with big balls”